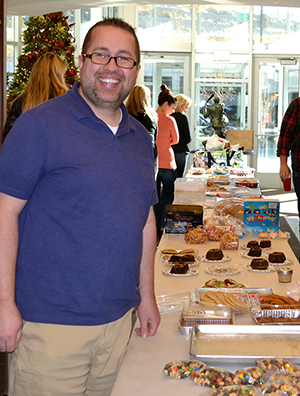 On Dec. 1, tables with baked goods for sale lined the first floor of our Salt Lake City office. But this wasn’t your ordinary bake sale. It was a fundraiser for Mark Davis, a housing coordinator with CompHealth locum tenens. Mark suffers from multiple sclerosis, and the $2,109 raised is going toward a potentially life-saving stem cell transplant procedure that he’ll soon be undertaking.

“I was diagnosed in April 2013,” says Mark, who started at CompHealth as a physician recruiter just a few years earlier. “It happened quick. One morning I woke up and experienced blurriness in my right eye, almost like someone had rubbed Vaseline over part of it.” Hoping it was a minor optic problem and not something worse, he went to the doctor. However, an MRI and further tests revealed that Mark was in the early stages of MS. Mark has since experienced additional symptoms, such as slowed cognition — a trait that doesn’t mesh well with the fast-paced environment of recruiting.

“I didn’t want to leave CompHealth, but there weren’t any other positions open for me,” Mark recalls. “I had a job offer at another company, but the day before I was supposed to start my new job, colleague Brian Sorensen said, “Hey, have you seen the new job posting for the housing coordinator?’ I went over and interviewed with Erik Adamson and knew it was exactly what I needed.”

Throughout his transition, CompHealth has made a difference to Mark in other ways, such as providing him with bigger monitors to compensate for his poor vision and by hosting this bake sale. The procedure, which could either stop Mark’s MS in its tracks or reverse some of his symptoms, could give Mark a brighter outlook — both physically and mentally — on his future.

“I’m incredibly fortunate to work for a company that understands my needs and helps me as much as CompHealth has,” Mark says. “I have never worked for a company like this before. From co-workers to senior VPs, the support has been there from the beginning.”

Why I love my sales job at CHG Healthcare